Sheila's Statistics
Sheila was whelped by Danny and RuthAnn Ford on May 4, 2004. I picked Sheila up when she was just 6 months old. She began her show career on the January circuit, a tough place to start but she won her class most days. She was plain of face but  stood stock still until you asked her to go. She had impeccable structure and movement along with her rock solid temperament she was fun to show. Mr Canalizo gave her a Best of Breed for her first 3 point major and Mrs R E Fetter finished her with a big 4 point major. 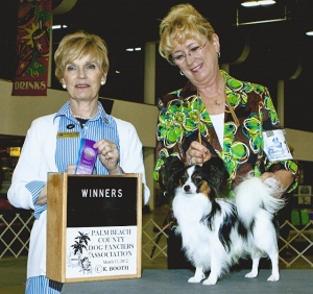 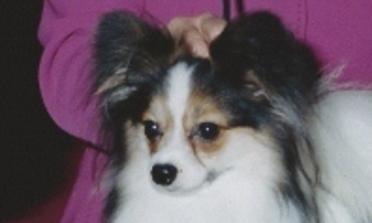 Willie's Statistics
He was whelped by RuthAnn and Danny Ford on January 5, 2004. He came to me in October of 2004. I showed him 8 times. He won 4 Four point majors, 3 reserves and a first place in his class. He won his first major the first time he set paws in the ring. RuthAnn put my name on him after he completed his thrilling race to the finish line. He was a fantastic dog to show, always up and full of contained energy. He loved to show. He went back home to Texas and was specialed for a while, winning a group 2. He was shown at Westminister as a very young dog. He lives with RuthAnn and Danny.

Willie loved playing with socks. This is a series of photos showing Willie jumping on the bed in our hotel room and finally catching that sock!

Cary's Statistics
He was whelped by RuthAnn and Danny Ford on June 6, 2005. He came to me with 6 points including a major.  I showed him 6 more times. He lost only twice, to his brother Forevr Errol Flynn. 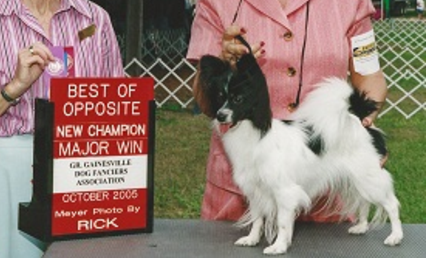 Chip's Statistics
Chip was whelped by RuthAnn and Danny Ford on August 18, 2005. I started showing Chip and he was winning his 6-9 puppy classes with competition. The 7th time I showed him he won Winners Dog for 2 points. Then we showed to Mrs Jane Kay, she awarded him Winners Dog and in the breed competition she was walking down the line and made a noise to get his attention and with one look at her he was completely spooked and jumped behind me. Unfortunately I could not get him back into the spirit of showing. He always seemed to be looking for the scarry lady. Mrs Kay appologized for scarring him but there really was nothing that she did. I showed him 8 more times before sending him back to RuthAnn and Danny for some R&R and time to forget. He earned another point or two with his new owner but never, to my knowledge, finished his championship. I was so sure of his finishing that I bred him to Lucy and he is the father of Zorro, CH Rocyns Don Diego de la Vega.

Mogwaii's Statistics
Mogwaii is Finn's littermate brother. He is owned and loved by RuthAnn and Danny Ford. He also came to me as a mature adult. What a pleasure to show. He finished in 10 shows with a 3 point major from Dorothy Dalton and a 5 point major from Christine Anderson.

Clark's Statistics
He was whelped by RuthAnn and Danny Ford on September 3, 2006. He came to me as a puppy. He grew into a beautiful dog. I started him in the 6-9 puppy class and our first weekend out we snagged that Winners and Best of Winners ribbon for 2 points.  His 7th show he won a big 4 point major under judge Judy Harrington. I sent him back to RuthAnn with 12 points and only needing that final major to finish which she put on him not long after his return 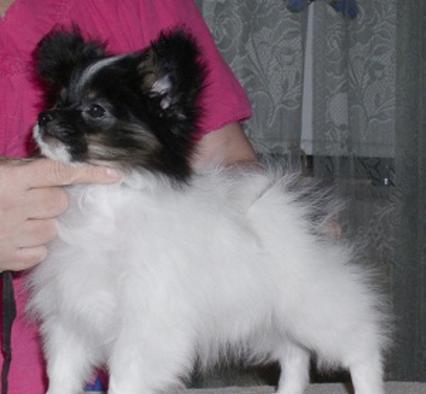 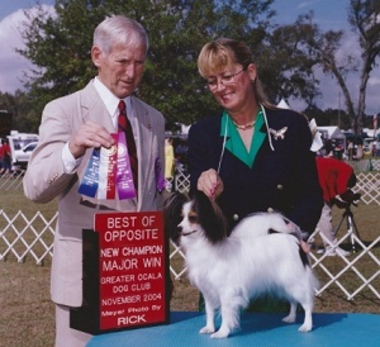 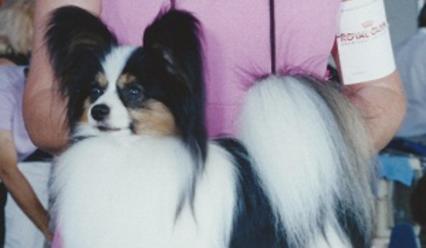 Prissy's statistics
Prissy had 5 points with a major when she came to me to be finished. She was 2 1/2 years old and was easily bored in the ring and would drop her tail. I learned how to pay attention to my dog and keep her entertained while showing. She finished for me in 9 shows with 2 four point majors. She is the mother on my Desi . 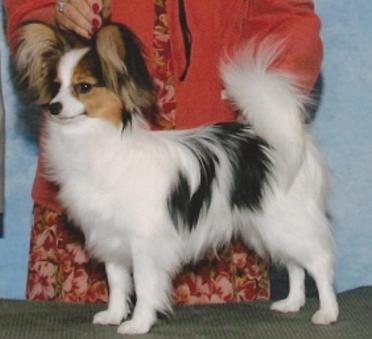 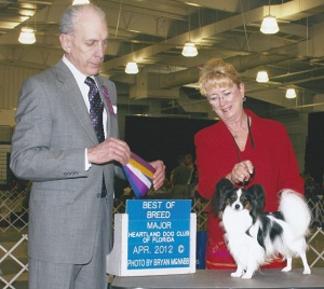 Romani's Statistics
Romani was whelped by RuthAnn and Danny Ford on April 13,2011 and came to me to see if he would grow enough to be shown. He's a beautiful little dog with beautiful structure and movement but he is little. Barely over 9 inches he has a big personality in that little body. Beaten in his class only one time he has earned  8 points with a major and that one was fantastic. He took the breed over the number 3 dog in the country and 4 other specials for the Best of Breed ribbon. It only got us 3 points but it was an exciting 3! The judge, Mr Robert Hutton, told me he was the picture of fine boned elegance! and boy is he right. He is also the proud father of a litter of 2 out of my Sophie, CH Rocyns South Beach Babe, a boy, Rocyn's Lucky Ryder and a girl, Rocyn's Southern Charm.

And a huge Thank You to Robert Hutton for Best of Breed,from the classes, over multiple specials!

Greta's Statistics
Greta came to me only needing her majors. I showed her a total of 7 times. Her first major was 4 points and Best of breed under judge Mrs Houston Clark. Her second major was also 4 points under Joseph Gregory. Greta's grandfather is the famous Kirby who won Best in Show at Westminister in 1999: BIS at the World show in Finland in 1998: Best of Breed at Westiminster in 1993, 1996, 1998 and 1999:  and Best in Speciality show at The Papillon Club of America in 1994, and 1997  and a final time as a 15 year old veteran in 2005. All in all, a very nice dog to have in a pedigree.